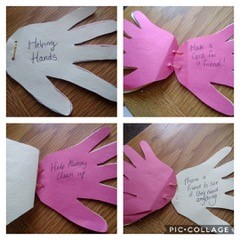 And now an activity from Rachael, Reuben and Myah who read the Story of the good Samaritan together.

One day Jesus told a story to a man who asked him how to be a good neighbour.  “There once was a Jewish man walking along a road.  He was coming from Jerusalem and was heading to Jericho, which was a full day or two of walking.The road was rocky and there were small hills all around. The man was just humming to himself and enjoying the nice day when suddenly a group of men jumped out from behind a hill. They took all his belongings and tore off most of his clothes. They didn’t want him to follow them so they beat him up very badly, and left him lying and bleeding on the side of the road. A few minutes later, a priest was walking down the same path and noticed the man lying on the side of the road. But he crossed the road and walked on the other side and acted like he didn’t see the man. About an hour or so later, another man, called a Levite, was walking down the road.  Levites were people who assisted priests with their work. He slowed down and walked a little closer to the man, but then kept walking without helping him at all. Just a few minutes later, another man came walking. He was a Samaritan.  But as soon as he saw the man, he went over to him and felt compassion for him.  He put bandages on his sores and poured oil and wine (which were quite expensive) on the sores to prevent them from getting worse.  Then he lifted the man on his own donkey and took him to a hotel to take care of him. After Jesus finished the story, he asked, “Which of the three men do you think was a neighbour to the man who was left beaten on the side of the road?” The man who asked him the question at the beginning replied, “The one who had compassion and helped him.” Jesus told him, “Go and do the same.”

The story of the good Samaritan demonstrates that friendship is defined by love and compassion, not race. This handprint craft will encourage us to think of ways we can lend a helping hand to our neighbours.